How Long Does it Take to Learn Chinese?

Since I’ve been in China for 28 years, and speak Chinese reasonably well, I am often asked 2 questions (by foreigners), neither of which have easy answers.

One is “are you fluent?”

My response is usually “fluent enough to get myself into and out of trouble.”

The second question is even harder: “how long did it take you to learn Chinese?” It’s a tough question, because it assumes that the words “learn” and “Chinese” are easily defined. Unfortunately they are not.

I usually respond that even though I started ‘learning’ Chinese 22 years ago, I don’t yet consider myself to have ‘learned’ Chinese,

When I do training/orientation sessions for newcomers to China, I get a generic version of that question, namely “how long does it take to learn Chinese.” This question is rooted in their enthusiasm and eagerness to learn Chinese, something I love about newbies. Most have visions of becoming functional (if not fluent) in a relatively short period of time.

The trick in responding to such a question is to do it in a way that doesn’t put a damper on all that enthusiasm, yet helps them be realistic about the immensity of the task.

One way to help set realistic expectations (and measure progress) is to use foreign language proficiency guidelines. For English speakers (in the US), there are two major sets of guidelines. One set is produced by the American Council on the Teaching of Foreign Languages (ACTFL Guidelines). The other set is produced by the Interagency Language Roundtable, and is used by theForeign Service Institute, the arm of the US State Department that trains diplomats. It is also commonly referred to as the FSI scale.

To help learners set realistic language learning goals, the FSI also classifies foreign languages according to how difficult they are for English speakers to learn. These charts (courtesy of SIL) indicate how long it normally takes for learners to reach the different FSI levels for different language groups. The three different lines on the charts represent learners with different aptitudes
You Chinese language learners know where this is going, don’t you?In other words a learner with average aptitude should plan to spend 50 weeks (@30 hours per week) to reach limited working proficiency level (2). 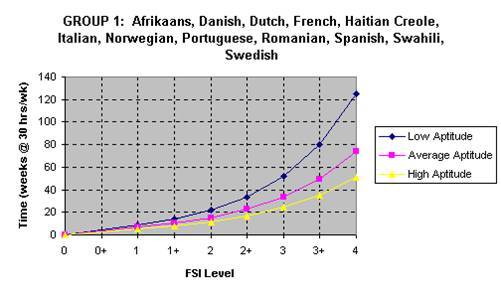 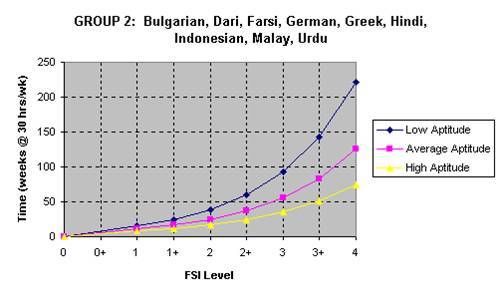 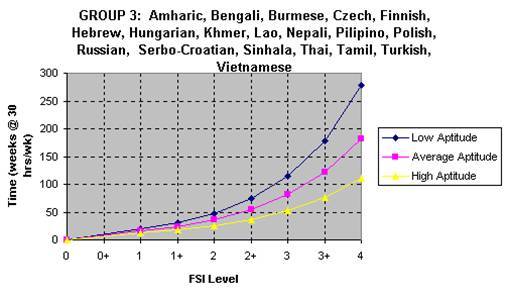 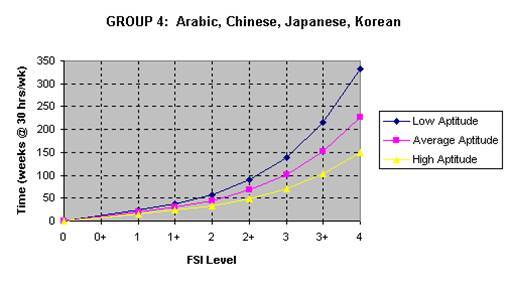 Again, I don’t post these to discourage any one learning Chinese but to help you set realistic expectations and goals.

Where ever you are in your language learning, I say JIAYOU! (加油)

What other methods do you have of setting realistic goals and measuring your progress?